Anyone have knowledge about how well an Eskimo Xeno converts to C1? I'm about 180# and 5'7". I saw the one posted in the library of boats here but looking for actual info on weight ranges and such. Thanks!
Top

Paddle a proto of one years ago - Only for a short time and then gave it away to a "in need" boater... it was okay.
Don't remember too much of it and how it handled ...so it was not a stand out C1.
I think unless its really a deal you do better with something else. My $.01. Hopefully someone with more experience can chime in.
Paul C.
Cboats Moderator
Official TOG Member (Team Old Guy)!
Top

a friend of mine converted one. He has 80 kg and thinks about the Xeno to be a a nice stable and forgiving riverrunner. 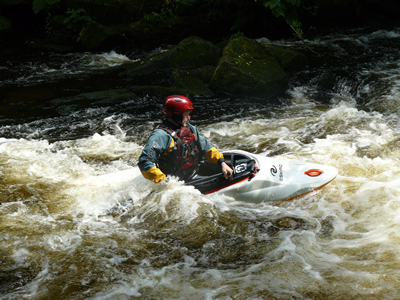 It's a pretty fit convertion (fit, as in: "exactly what I want in a boat for X") I'm about 10-15 lb heavier than you, and liked the one i used, not as good as an LL Session+ or a Dagger Medieval, but more forgiving than either.
Joshua Kelly - "More George Smiley than James Bond"

CBoats Moderator - Not necessarily representing the CBoats staff though...(I'll use words like "moderator", "We" and "CBoats" to make it clear when I am)
Top

Just got one handed to me from the local Eskimo Rep the other night and I outfitted it with the Wheelboy saddle I got from Larry. Should be interesting!!
Top
Post Reply
6 posts • Page 1 of 1