Passing of a true legend.

Passing of a true legend.

I just found out that John Berry passed away. Here is an obituary that Charlie Walbridge is composing for AW.

John L. Berry, 86, of Belchertown, MA, died peacefully on Thursday, Aug. 11. He was 86. Berry lived in Bethesda, Maryland and was an outstanding whitewater canoeist and competitor during the 50's and 60's. He began racing in 1956 at the Brandywine Slalom and was National C-1 and C-2 Champion many times. In 1961 he was a member of the first US team to compete at the World Championships. The races were held in East Germany and what he and his teammates learned there inspired huge advances in American whitewater sport. As a member of the Canoe Cruiser's Association of Washington, DC he explored much of the Potomac and Cheat headwaters during the 1950's. He also made several early descents of the Lower Yough. In 1957 he and his long-time C-2 partner Bob Harrigan lead the first descent of West Virginia's Cheat Canyon. The trip took 2 days with Berry solo paddling a half-decked wood-and canvas canoe. In September the pair lead one of the first trips down the New River Gorge, taking three days to go from Thurmond to Fayette Station. During the mid-sixities he also led several trips down a pre-dam Gauley River. He completed one run at very low water but was forced to abort the second run because of high flows.

Berry was a leader in the early stages of decked canoe and open canoe development. In 1960 he designed one of the first closed-deck C-1's made in this country. It was barely paddleable, but he knew he was onto something. He began offering his canoes for resale in 1965 as "Mad River Canoe & Kayak". Most paddlers back then built their own boats, and he offered one of the few ways for a non-builder to get on the water. Mid-States paddlers like Bob Burrell and Charlie Walbridge used his "Modified Czech" C-1. a In 1970 he moved from the DC area to Waitsfield, VT, changing his name to " Millbrook Boats", because the name "Mad River Canoe" was already trademarked. In 1975 Millbrook Boats moved from Waitsfield to the Hudson River in Riparius, NY. Here Berry designed his legendary open canoes: the ME, the Flasher, the Flashback, and the AC/DC. He was active in open canoe slalom and wildwater racing and his designs revolutionized the sport. Anyone who paddles a whitewater canoe today owes much to his innovations. In 1988 Berry sold the business to John Kazimierczyk, who continues the Millbrook legacy of innovative light-weight designs.

A resident of Belchertown, MA since 1989, Berry paddled on the nearby Swift River daily until this past year. His beloved wife of 63 years, Janet Berry, passed away a year ago. He is survived by his three daughters, Katharine L. Berry, Rebecca Berry Creswell, Virginia Berry and son John Berry, Jr., four grandchildren and a great grandson.
Top

John was a true legend and pioneer of whitewater canoeing and canoe design in the US. It was an honor to speak with him the few times I had the opportunity. He will be missed!
Keep the C!
Adam
Top

I certainly knew the name, but the story is amazing. Thanks for sharing with us how much Mr. Berry did for us and our sport. He will be missed, but certainly not forgotten.

His memory will live on in so many boats on so many rivers...
C-Boats Moderator
http://picasaweb.google.com/scott.broam/CanoeOutfitting
Top

A life well-lived. Hard to imagine what paddling must of been like back in those pioneer days. RIP John Berry.
BrownDog Boats- "Bring the Dog"
Top

My first C boat was a John Berry design, a C2 that I paddled with my brother Doug for several years - the 'Berrigan'. Fond memories!

I knew John well in the 80's. I bought two canoes from him, took instruction from him on the Hudson and Schroon, and corresponded and visited with him on and off for years. I wrote him a check for an ME on a piece of minicell foam, which I suggested he glue on a Perception saddle so it would always be close to his heart. He did, on one of his rental canoes.

Whenever I pass through Riparius, NY, I think fondly of John and his influence on me.

John was a canoe pioneer in multiple areas: boat design, racing technique, instruction, and opening up many new rivers to open boating with his early club, the Washington Canoe Cruisers in the 50's and 60's.

An iconoclast with a wry sense of humor, John hung his UPenn Wharton diploma over the toilet in his Riparius shop, named his boats with sexual innuendos (Flasher, Maximum Exposure, Flashback, AC/DC), and gave the only ironclad boat warranty in the business: "Ten yards or ten seconds, whichever comes first."

The story he told me about the name of his Waitsfield shop was that he initially named it Mad River Canoe and Kayak, which of course annoyed Jim Henry. John said they went down to a local bar to settle the matter. John first proposed an axe throwing contest to determine who got the name, as he was, again iconoclastically, a champion axe thrower. Henry didn't take the bait, so they flipped a coin and Jim won.

John had preternaturally long arms with genetic guns, and was as good a paddling specimen as I have ever met. Here is a picture of him in the bow with his long time racing partner Bob Harrigan. 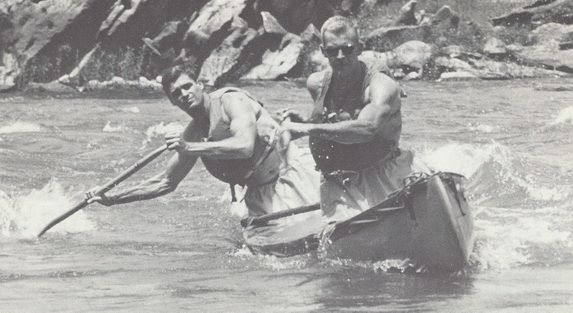 not many folks have as much impact on as sport as he did he will be missed. The sport now has a great pioneer watching over it.
Richard Guin
Lazy good for nothing slacker
Top

Along time ago (early 80's), you led a trip down Hudson Gorge on which I met some life-long boating friends. I haven't been in touch with you since that time.
Do you remember that trip? I'll never forget it.

Sorry For hijacking this topic.

I remember you well, Bruce.

I mean, how many guys have I met who soloed a Hydra Duet and practiced rolling at the bottom of Soup Strainer.

I haven't been paddling any real whitewater for about 10 years nor anything in Reno, Nevada, recently.

One of the reasons I used to lead trips every spring and fall in the Adirondacks was the influence of John Berry. He drew a detailed scroll map of the upper Hudson, of which I have an original copy.
Top
Post Reply
11 posts • Page 1 of 1