Recently there was discussion in a thread about how with the right formula or factors, one could predict which boats would be more stable, less tippy, than others.

The thread did not give much attention to fore/aft asymmetry and how a boat's trim is set up to accomodate that asymmetry.

Certain boats, though relatively round or roly poly, are *functionally* very stable. They might feel a bit soft, but not "tippy". Examples I would cite are the Hahn and the Magnet, both relatively full from end to end, and both very close to symmetrical.

As c-boats and the kayaks from which they were "converted" evolved, the commonest change was a degree of swedeforming, where the stern became broader and flatter and the bow became narrower, perhaps less flat. Was the Gyramax swedeformed a bit? I don't recall. The Dagger Cascade, on the other hand, might have been a bit fishformed, broader in the bow.

A c-boat may come with a cockpit rim set in place. This means that the paddler's weight distribution and that of the boat as a whole is not easily adjusted. (Open boats are easier, as are converted kayaks because the cockpit is quite large.)

My first c-1 was a Hahn, and after wasting some time in a Sage, I bought a second hand Phoenix Seewun. It is a very swedeform boat. From the beginning, I noticed a tendency for the bow to bury and the stern to lift in rapids like Tablesaw. But I didn't know what the misbehavior meant.

Later, I bought a Millbrook Wide Ride, a somewhat swedeformed c-1. Mostly it has handled quite well, but I've noticed that it seems to make me sit up a bit too straight, because of the cockpit position. The bow is a teensy bit too grabby.

Both of these c-boats need their cockpits moved back a couple of inches, at least with a very tall, heavy paddler like me in them. They need to be working more on their broad, wide tail section, not on their fast, sharp noses.

Here are a couple of shots of the Wide Ride. I'm not trying to look competent, I'm just posturing to show you how the bow and stern maybe aren't responding quite the way they should. Functionally, the bow is too low volume and grabby. 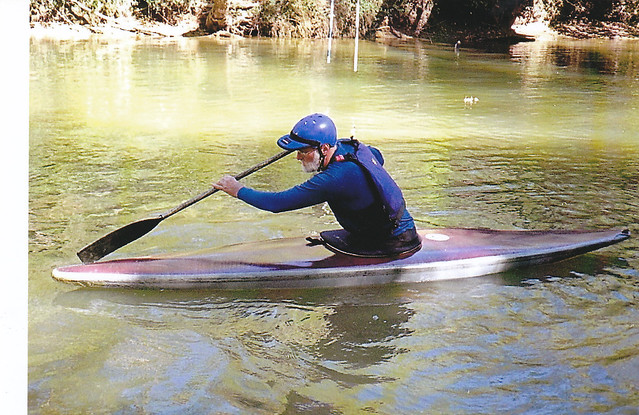 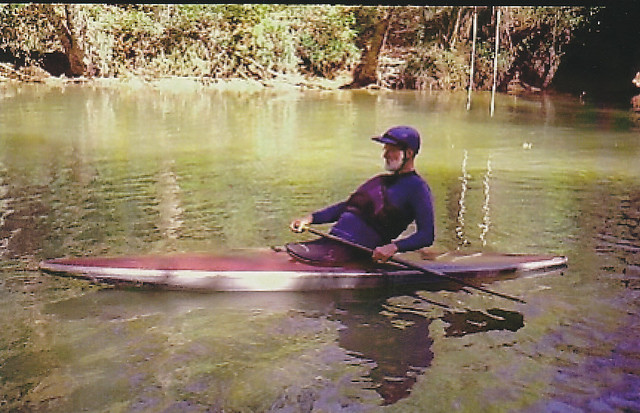 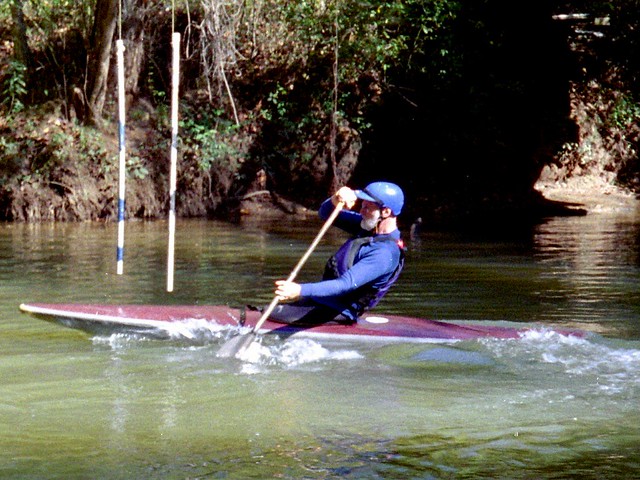 Here I am trying to surf in the Phoenix, at a tiny hole on the Conejos in Colorado. I'm having to lean WAY back to keep the bow from getting stuffed or purling or whatever. 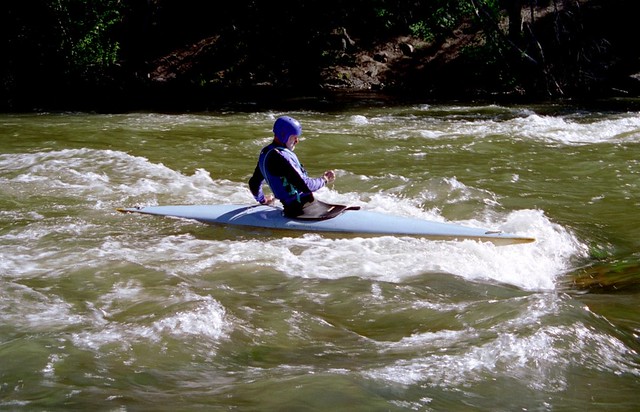 The Phoenix Seewun was an early attempt at a low end race boat, and it never amounted to much. But if I had solved the technical problem of moving the (strongly tilted) cockpit a couple of inches sternward, it would have helped the boat keep its nose out of the cat pan.

The Wide Ride, I believe, can be modified by splitting the cockpit at the rear, and spreading the "wings" to make room for my butt. The Wide Ride has the potential to be a very sharp handling boat when its working zone is moved sternward.

These issues can be approached similarly with ww open boats. Is the hull swedeform? Then move the saddle back to make sure the working zone is back of the boat's midpoint.

Fishform open boats, surprisingly, should not be pedestaled too far "forward". If they are, they will swivel and wallow on their bow. They need to be rigged a bit farther back so the fishy zone can track and contribute to speed.

So the upshot is, if a boat is quite asymmetrical, and if the paddler's avoirdupois is in the wrong place, the boat may feel "tippy". It may feel like it is swiveling ln its nose, or as if the river is working the stern.

This can get complicated, but then it's interesting. Sort of.

((Incidentally, I think the Wide Ride deserves a higher rating, and it compared favorably to certain other pocket c-1s I have tried, including the Magnet, the MiniMax, and the Atom. Although a somewhat conservative design, the Wide Ride is very capable, and has no serious faults. ))
Top

I completely agree that trim in C1 is important, much more important than it seems to be in a kayak, because the paddler CG is so much higher and makes so much more difference when you reach right forward for a big catch.

Just thinking about my cut-down that I described in another thread, I am still sure I have taken too much out of the stern and made it too tail happy, but you just made me think about how I tried to paddle it.
When I'm nervous I tend to sit back and rely on stern volume, it is totally counter-intuitive to me to reach forwards in a boat that I am nervous in, especially C1. I'd rather sit upright, perhaps slightly back on my haunches and keep the paddle low ready to brace, than reach forward, commit the paddle to a power stroke and trust my balance to keep me upright. Maybe I would have a different experience if I tried to be a bit more positive in it - reach forward and trust the narrower (longer) bow section to support me.....
Top

Yeah, I've had that problem, but a few years in a slalom boat helped cure it.

If you watch the Olympic tapes, a lot of the good guys are paddling trimmed bow up, riding the stern flat as if they were landing Space Shuttles. In such turbulent water, with hole after hole to cross, who can blame them?

But watch any of them on an easy slalom course, and they'll be trimmed cab forward, using the sharp bow for speed.

If by "fishform", you mean that the widest part of the boat is forward of the midpoint...

The reason slalom boats are wider behind the paddler is that the rules mandate a minimum width.
Since power strokes are almost always done in front of the cockpit, the boat is most narrow up there. The excess width in back is just to comply with the rules.
Bob P
Top

I think you're entirely correct about the dimensionality, though perhaps paddlers distorted boats more than was needed. I don't find the bows of my fishform boats any more in the way of my feeble power strokes than the bows of my swedeform boats. The paddle blade is planted out a little from the bow.

Slalom kayakers like Shipley paddle a lot at a 45 degree angle, and don't need to get the blade close to the hull much of the time.

Slalom c-boaters are the ones most in need of a vertical plant close to the bow. Kayakers, less so. depends on the guy.

I think boat speed considerations by designers were, and still are, a big reason for swedeform. Let the bow cut, and the stern lounge in the trailing turbulence.

Do you still try to keep the bow narrow on your open boat slalom designs? On which of your c-1 designs is the bow wide enough to be "in the way"? The L.N. Amoeba?

As far as decked slalom-boats being 'swede-form'...the other reason is that (all things being equal...or equal-ish) swede-form hulls are simply faster. Fish-form boats generally track better, they are easier to paddle, but they won't accelerate with a swede-form of equal length/width/proper design. Take a look at people racing flat-water boats...they're all swede-form...with a few symmetrical boats here and there, as even a symmetrical boat (again, all things being equal-ish) will outrun a fish-form. As far as open canoe slalom goes (and I'm far from an expert) the way OCer's move through the gates is different than the way a decked boat does...as an OC will not fit UNDER the gate, which means a wider turn must be negotiated, followed by a driving straight line ALL THE WAY THOUGH (in the case of an upstream gate) in which case I would guess the easier tracking of fish-form can trump the faster acceleration of the swede form. Since I don't paddle slalom much anymore, I prefer either swede or symmetrical boats, but to each his own

Canoeing isn't a sport...its an art. Unfortunately, I am not exactly Michelangelo.
Top

All this headache on TRIM and FISH and SWEDE and EDGE and THIS and THAT and the OTHER bloody THING is another reason I actually LIKE symmetrical hulls. Just get in it and make sure it is perfectly balanced...congratulations! You're done. No more screwing with it. As far as I can tell and am aware, (and correct me if I'm wrong) a symmetrical hull will always perform at absolute best when trimmed out level...man it makes things easier!
Canoeing isn't a sport...its an art. Unfortunately, I am not exactly Michelangelo.
Top

A good symmetrical design like the Magnet is a wonderful thing. Whether trim deviations are deliberate through dynamic leans, or inadvertent through seat placement, the boat tolerates it much better. A swedeform is much fussier.

A swedeform tends to be faster, but my experience with my own boats indicates that fishform accelerates better, not swedeform. YMMV.
Top

To paraphrase what a supreme court justice once said about obscenity - i can't define stability, but I know it when I feel it.
C-Boats Moderator
http://picasaweb.google.com/scott.broam/CanoeOutfitting
Top

Tha's right, it's a dynamic inteaction. A Piece of Plywood is stable, until you practice edging.